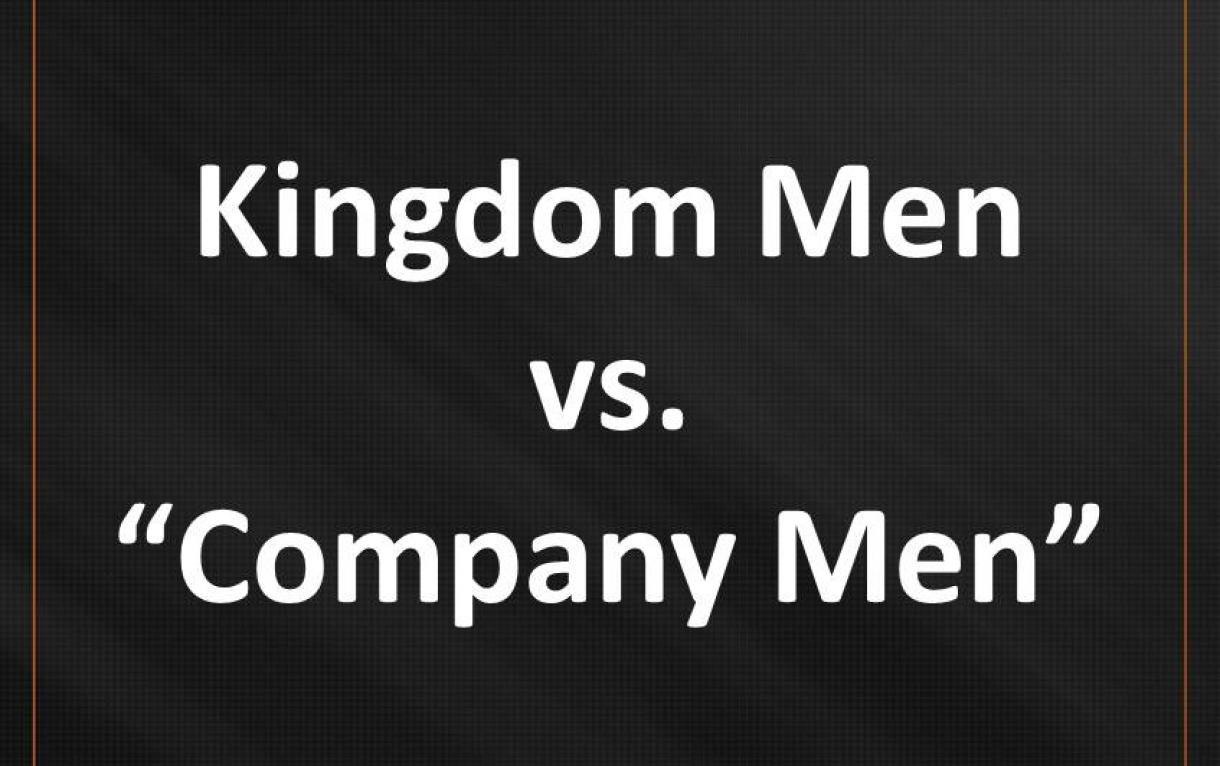 Kingdom Men are zealous for CHRIST’S KINGDOM. Company Men are zealous for “THEIR GROUP.” Allegiance to certain distinctives and “group think” must never usurp devotion to Christ. In the minds of company men is the belief that loyalty to the group is tantamount to faithfulness to Christ. You see this mindset in the Pharisees who developed their system to the point where they had hundreds of rules (“do’s and don’ts”) which were merely fabrications of their imaginative interpretation. Conformity to those externals became paramount as the heart behind the maxim was totally lost. All religion has a proneness to externality which eliminates the internalization of truth that boils down to a system void of life. Such was the Pharisee’s religion. They missed the Messiah because they were so caught up in their “cause” that they failed to apprehend “THE Christ” that their cherished Scriptures pointed toward! While claiming adherence to the Book, they actually became enemies to Christ and participated in His crucifixion! (Company Men and denominational loyalist beware.)

Kingdom Men are OBJECTIVE about excesses and errors. Company Men OVERLOOK excesses and errors among their associates. Company Men are reluctant to even acknowledge overstatements, exaggerations, and denials of truth so long as those making the statements are leaning in the same direction as they are. Every group has strengths and weaknesses. But you will seldom find a Company Man willing to “call out” an erring emphasis or straying brother within his group. Company men are infected by the “fear of man”—they are insecure. This eliminates the effort to CARE-FRONT (confront) which is the sole means of preserving the Truth.

Some estimate that 80% of American churches will eventually sanction the “same-sex” legitimization which is currently on the front burner. If your group abandons the Truth, you must abandon it! Kingdom Men never side with Christ’s enemies. They never condone what the Word condemns. Kingdom Men never change the “black and white” moral tenets of Scripture into faded grays. Kingdom Men most often stand alone, because Company Men are more concerned with temporal repercussions than fidelity to God’s Truth.

Kingdom Men take a stand on the NON-NEGOIABLE principles. Company Men take stands on a host of NEGOICABLE issues. They make “too much” of “too little” by elevating their preferences to the position of principle. Every man must live according to conscience and be true to his convictions (Romans 14). But God’s children must yield that same responsibility and privilege to others who see incidentals in a different light. Not everything is ABSOLUTE, and “lesser things” vary from person to person.

Kingdom Men Keep Their Ears Open to HEAR FROM HEAVEN. Company Men are Keen to Listen to What “The Brethren” are Saying. Kingdom men cherish the “still small voice.” The Savior’s call is their command. They studiously avoid gossip and needless contention. Evil speaking is quickly and pointedly rebuked and rejected—lest the gentle Dove become grieved. Not so with Company Men! They relish in evil reports, speculations, judging motives, as well as exposing the faults and failures of others. Most often this is very vocal and verbose except in cases where a fellow Company Man messes up, then there is a deafening SILENCE.

With Company Men loyalty is defined by “lock-step agreement”, on ALL points. The most outrageous, extreme statements are tolerated with sheepish accommodation. “Over-the-top positions” are swept aside in order to keep favor within the camp. The “fear of man” sets a trap that overtakes the unsuspecting. But Kingdom Men never stick a wet finger in the air to determine which way the breeze of opinion is blowing. Heaven’s approval trumps everything, including acceptance within their group.

Kingdom Men are BALANCED in relation to Grace and Truth. Company Men tend toward EXTREMES. For example, the “all grace” group tends toward blindness on matters of bedrock, moral truth. They condescendingly look down on principled people as unenlightened dinosaurs who are out of touch with this generation. On the other hand, the “all truth” crowd is comprised of legal eagles who are experts on the minutiae of the Law. Harshness, and even hatefulness, is justified in the name of Truth. Love is nowhere to be found in the mix with this distortion. The biblical tension is cast aside by making everything a “fall-on-the-sword issue.” By excluding Grace, or Truth, from the equation both sides reach unscriptural positions which become entrenched. This breeds a superior disposition which smirks at anyone who differs with them. But Kingdom Men keep the balance by “walking in the Spirit”, which is the prerequisite to discernment.

Most want to identify with likeminded individuals, and this is fine. Thank God for every Christ-honoring fellowship. Belonging to a group can be beneficial. Banding together can, and should, strengthen us in our work. The problem comes when objectivity is lost and the movement becomes paramount. Neither the Left-wingers nor the Right-wingers have a monopoly on the card-carrying, union-shop mentality. Lemmings abound on both sides.
Exercise your God-given powers of discernment. Refuse to surrender your ultimate allegiance to any movement, man, or institution. Keep your eyes and ears open. Don’t sell your soul to the “company store.” Learn to appreciate Grace wherever you find it. Our lives can be spent promoting Christ’s kingdom, or a Cause. Jesus came preaching the Kingdom of God—AND SO SHOULD WE.