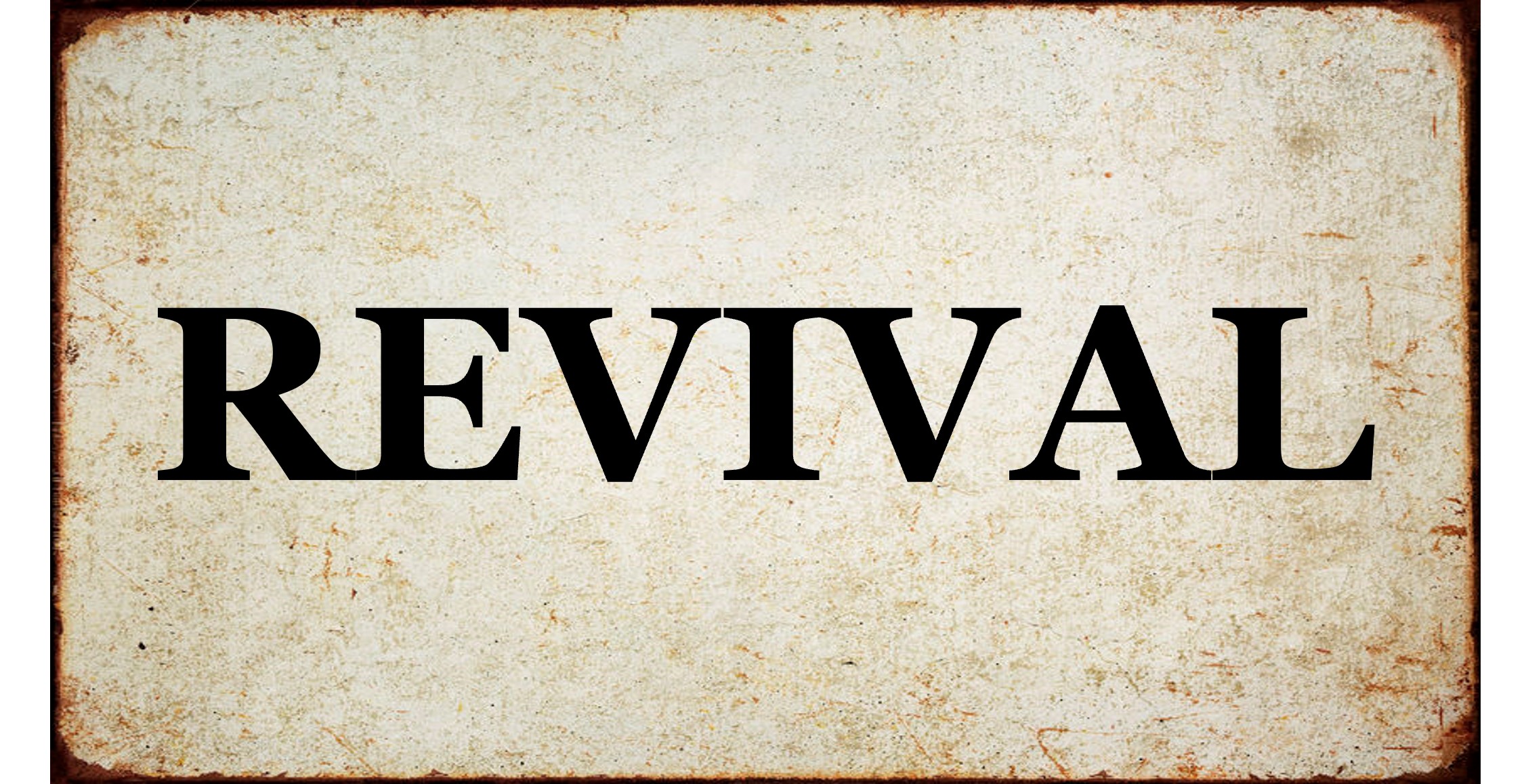 “Revival is God’s finger pointed right at me!” —Mel Johnson

“Revival is not the top blowing off but the bottom falling out.” —Darrell Bridges

“You can pray until doomsday for revival, but you will never get it without repentance and confession of sin in the Christian life.” —Erlo Stegan

Our generation has grown up with “cheap grace” and “easy religion.” The average church is seldom challenged with the possibility of deep spiritual experience. In fact you get the impression from many people that encountering the Lord is only a lightweight religious incident with only minor implications.

Imagine you were standing beside a busy highway. A semi tractor trailer, loaded with 60,000 pounds of cargo and traveling at 70 M.P.H., strikes you while you are standing there. There is no question that the impact would leave an impression on you! When you have a head-on collision with a holy God, it will affect you in profound ways. Encountering God may seem fearful at first, but the subsequent joy so overrides any initial pain that it is soon forgotten.

“It is possible to evade a multitude of sorrows by the cultivation of an insignificant life,” said J.H. Jowett. Anything of real worth cost something. Genuine revival does not occur simply to improve our reputation, vindicate our theology, add to our membership, or merely excite us. The divine purpose of revival is to magnify God’s name, advance His kingdom, and accomplish His will. When God moves there are many “good things” that accompany it, but preceding the honey there is always the sting of conviction.

I don’t believe Christians should live in the past, but we must deal with the past. The church at Sardis was told to “remember.” Having once known the higher heights of God-realization, this congregation had fallen into a terrible slump. The Lord challenged them first to recall where they had been in contrast to where they were currently.

Taking a long, hard look at ourselves may not be a pleasant exercise. It is like God-initiated chastisement in that it is not enjoyable for the moment, but afterward it yields the beneficial fruit of righteousness.

Nothing is more devastating to the human ego than a good dose of God-revealed self-knowledge. When Isaiah the prophet met God he cried, “Woe is me.” The stinging pain that accompanies authentic self-discovery is intense. Morbid introspection is neither healthy nor helpful, but Holy Spirit inspection is periodically necessary and immensely beneficial. As the hymn writer pointed out, we are indeed “prone to wander,” and just like the prodigal who “came to himself,” so must we.

The first step toward revitalization is recollection. But God not only admonished the Christians at Sardis to “remember,” He also challenged them to “repent.”

Joseph and Mary were traveling back to Nazareth after participating in the Passover at Jerusalem. They had traveled a considerable distance, not realizing they had left Him. Mistakenly, “supposing him (Jesus) to have been in the company, they went a day’s journey.” Frantically, they began to look for him among family and friends within the caravan. This led to three days of backtracking until they finally found Jesus in the exact place where they had left Him: Jerusalem.

It is possible to lose touch with Jesus and not even know it. Have you ever been going along in life, supposing Jesus is “with you,” only to discover at some point that you have been traveling alone? Joseph and Mary found it necessary to retrace their steps to the place where they lost touch with Christ, and so must we.

The route to restoration always involves repentance. When you became a Christian you turned “to Christ.” And this initial turning has lifelong implications. Having turned to Christ for salvation, you will need to “return” to Him as often as you realize you have turned away.

Job was an amazing man, but when he got a clear vision of God, he declared, “I abhor myself, and repent in dust and ashes” (Job 42:6). It was his unobstructed sight of God that brought staggering conviction of sin. Sin is the consequence of a low view of God, and repentance is the result of a high view of God. When Job “saw” the Lord, he bowed his head and repented.

When God is brooding over His people there are seasons when the sense of sin can be overwhelming. One believer described himself as an “onion Christian.” The Holy Spirit peeled off layer after layer of sin in this protracted meeting. Night after night the light of God’s presence revealed deeper levels where repentance was needed. This individual fully cooperated with God’s Spirit and experienced lasting renewal and rejoicing in his daily life.

In addition to Remembrance and Repentance, there is also…

Sin has a horizontal as well as a vertical dimension. The Cross points sideways as well as upward. When a person’s conscience is sensitized, he becomes aware of how he has sinned against his fellow human beings. Having gone to the Cross for a bath in Jesus’ blood, he is now ready to make amends with those he has offended. No price is too great to pay for a clear conscience.

After Zacchaeus met the Lord, he paid back those whom he had cheated. I am confident that this clearing of his conscience was not a burden or drudgery. The mercy of God had flooded his heart, and he was eager to make things right with those he had wronged. Repentance had silenced his scruples toward heaven, but there remained a keenly felt need to seek reconciliation on the human level.

When a man meets God in revival, he is compelled to find resolution with his fellow man. Through the years we have come across ten words that can put a troubled soul at rest. These words are “I was wrong. I am sorry. Will you forgive me?” No excuses, no accusations—just a heartfelt feeling of responsibility and repentance for wrongs inflicted on others.

There is something disarming and liberating about humbling one’s self. The Bible says, “He that shall humble himself shall be exalted” (Mat. 23:12). You often regain respect from those you have wounded when you humbly ask their forgiveness. The sweetness of restored fellowship is like heaven on earth. God promises to lift you up when you “humble yourselves in the sight of the Lord” (James 4:10). This “lifting” is God’s reward for bowing our proud, stiff necks.

I have a friend who was converted later in life. After meeting God in revival, he felt compelled to confess his sin to his employer. The boss called him in and asked, “What kind of year-end bonus do you think you deserve?” He replied, “I don’t think I deserve any bonus, because the truth is, I have been stealing from you for five years.” His manager was stunned and wondered what would motivate a man to confess stealing. After all, this man could have gone to jail, lost his job, and lost his reputation. But being clear with God and man was more important to him than any earthly consideration. The boss listened intently to my friend’s testimony. Not only did he not get fired, he received a multi-thousand dollar bonus!

D.L. Moody was working for the Lord and once had a prayer meeting where he had it out with God. That’s when the anointing came on him. After this experience he said, “I used to carry buckets for Jesus, but now I’ve found a river that’s carrying me.”

Our God is a supremely happy God, for in His presence is fullness of joy (Ps. 16:11). It is good to sense the smile of the heavenly Father. It is great when you know there is nothing between your soul and the Savior.

Revival deals with those things that keep us from enjoying God. Once the obstacles are removed, the fullness of the Holy Spirit yields the fruit of joy. “Feel-good religion” may not be our cup of tea, but there is nothing wrong with feeling good every now and then! It is God’s will for us to experience a note of holy joy while still upon earth. In revival, people “rejoice with joy unspeakable and full of glory” (1 Pet. 1:8). When congregations are blessed with corporate revival, the tone and character of the church is transformed with overflowing joy.

Like a woman who has just delivered her child, the pain of labor is replaced by the excitement that accompanies bringing a new life into the world. So it is when the heart is clear and the mind is at ease in the presence of God.