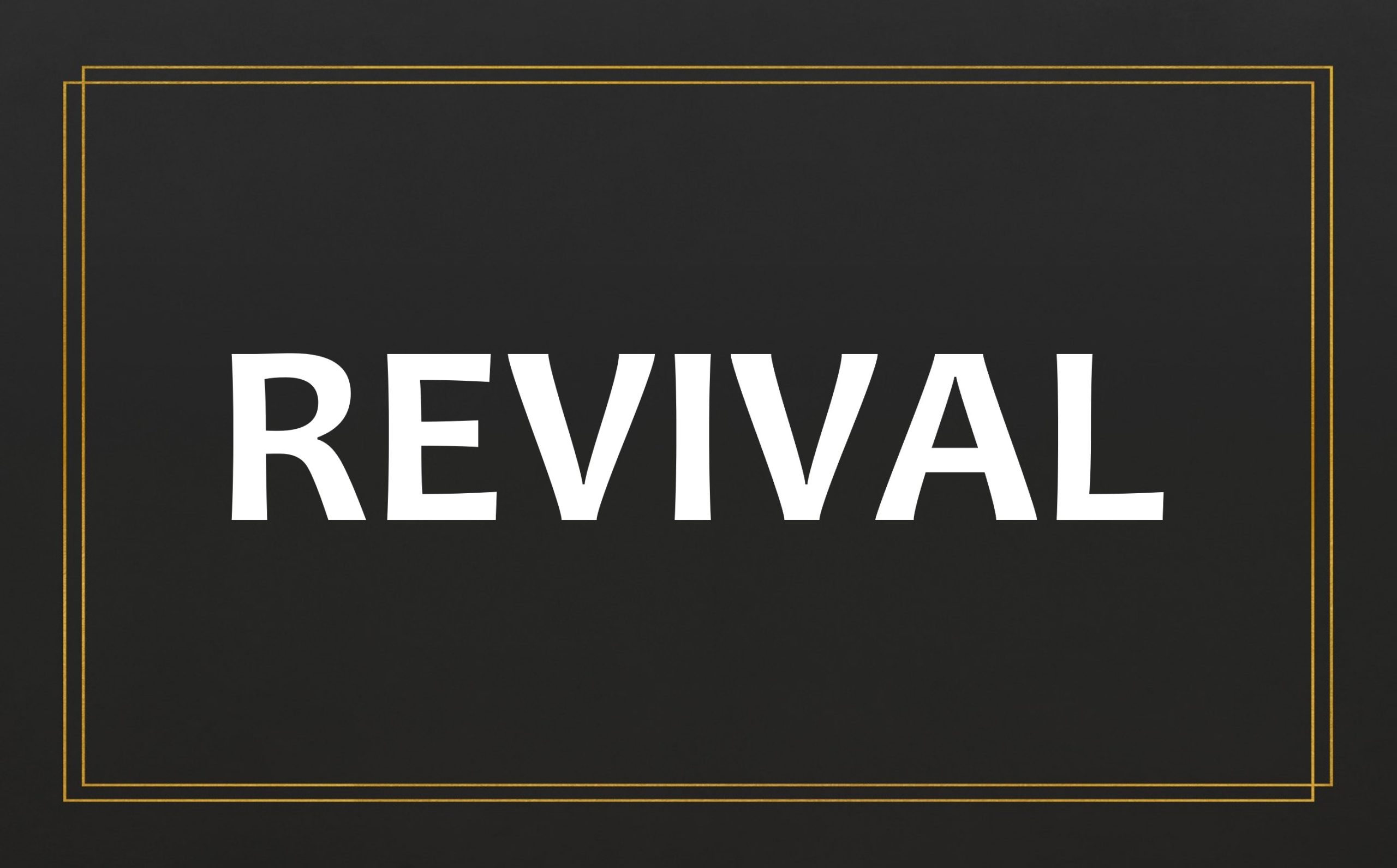 “While the churches cannot make revival, they can prepare for it and make the most of it when it comes… the church that’s fully prepared for revival is already in it.” —Edward Last

“If my people, which are called by my name, shall humble themselves, and pray, and seek my face, and turn from their wicked ways; then will I hear from heaven, and will forgive their sin, and will heal their land” (2 Chronicles 7:14).

God gave the amazing promise found in 2 Chronicles 7:14 to His covenant people Israel. Since all Scripture is profitable for doctrine, reproof, correction, and instruction in righteousness (2 Tim. 3:16), there are undoubtedly valuable lessons we can learn from this text. This verse along with the entire Old Testament was given for our learning. It is impossible to manufacture that which only God can give, but we can and must prepare the way of the Lord.

“If ” contains only two letters, but it is one of the biggest words in the Bible. Time after time we read about the implications of that two-letter word: “If we walk in the light … the blood … cleanses” (1 Jn. 1:7), “If we confess our sins, he is faithful … to forgive” (1 Jn. 1:9), “If ye abide in me … you shall ask … and it shall be done” (Jn. 15:7). Human actions provoke divine reactions. “Draw nigh to God, and he will draw nigh to you” (James 4:8). When a man moves toward God, it causes God to move toward him. Every move in the direction of heaven is reciprocated.

“If ” means you have a part to play and a choice to pray. You can opt for a tender heart. Bill McCleod said, “Our heart should be so tender that if a leaf fell on it, it would leave an impression.” Heart preparation is the first step in preparing for revival.

God’s kingdom hinges on the prerogative of the King and the actions of His subjects. Notice it says, “If my people” (emphasis added). God pledged to deal with His people according to their choices. This promise was not directed to the idolaters and heathen, but to the people of God. Israel belonged to the old covenant, but we are part of the new covenant (a better covenant). Do not doubt that God works on earth in conjunction with His people.

Humility has been called the royal insignia of the child of God. It is the foundation of all virtue and the key to grace and mercy. It is the modest mindset that God finds so attractive. God rewards the humble with grace, which is the desire and power to do right. When Naaman bent his stiff neck and obeyed the prophet, he was healed. Even the high-minded Nebuchadnezzar was restored to power after seven years of therapy in the fields grazing with animals! Humility blesses the heart of God, and He in turn blesses the humble.

You cannot find a person in the entire universe who is more humble than God. How could the “high and holy one who inhabits eternity” condescend to identify with a wicked and sinful humanity? A respected Christian doctor was married to an alcoholic wife. Year after year, she went to the bars and got drunk. Night after night this godly man would go out in the wee hours of the night to retrieve his drunken wife. People in the town were disgusted with this hopeless prodigal. Seeing her lying on the street, they would pass her by and leave her lying on the ground.

One evening this doctor went out searching for his wife. He found her lying in the street, soaked in her own vomit. Others saw her and quickly passed by, but her husband picked her up, took her home, cleaned her up, and put her to bed. This man’s willingness to relinquish his reputation, and stand by his wife opened her heart to the gospel. When she learned that the “high and lofty one” was willing to leave the glories of heaven, take on a human form, be born of a virgin, and identify with sinners by dying in their place, her heart was melted. She had witnessed this type of love in her husband. After she was converted, she wrote the following chorus:

No wonder we are admonished in Philippians, “Let this mind be in you, which was also in Christ Jesus: Who, being in the form of God, thought it not robbery to be equal with God: But made himself of no reputation, and took upon him the form of a servant, and was made in the likeness of men: And being found in fashion as a man, he humbled himself, and became obedient unto death, even the death of the cross. Wherefore God also hath highly exalted him, and given him a name which is above every name” (2:5-9 emphasis added).

Jesus humbled himself and was highly exalted. Here we see the divine pattern—the way up is down! Grace rushes to the rescue whenever we take the low road. Mercy always lifts us when we choose to kneel.

“Humility is having insight into our own insignificance,” writes Andrew Murray. It is the recognition of God’s greatness and our smallness. Self fades when we see God in His rightful place.

Prayer is not overcoming reluctance in God. There is no need to attempt strong-arming Deity (which is impossible) to do our bidding. We have a prayer answering God who delights in responding to the prayers of His children. Jesus gave a parable in Luke 18 about an unjust judge, who did not fear God and had no regard for man. Yet, he granted a widow her request just to get her to stop bothering him. The point of this parable contrasts our heavenly Father with this wicked judge. The judge was essentially badgered into assisting this woman, but God is quick to answer the prayers of his own elect. God is anxious to respond to the cries of those humble enough to recognize their need. You can ask God to quicken your heart. You can ask God to draw near in mercy. God delights in giving good gifts to His children.

The word seek means “to search out or strive after.” This verse instructs us to seek God’s face while the New Testament tells us to seek “first the kingdom of God” (Mat. 6:33). The main focus in revival is God. It is His person, presence, and preeminence which is central. It is not merely His gifts or favors—it is God’s immediate presence that we seek.

You will get what you go after. God said, “Ye shall seek me, and find me, when ye shall search for me with all your heart” (Jer. 29:13). You will find what you are looking for. Aren’t you glad that God guarantees that you will find Him when your search is wholehearted? In eternity we will behold Him. But like Absalom said, “What good is it to dwell in Jerusalem if we never see the face of the King?” (2 Sam. 14:28,32 author’s summation). Should we not seek His face while we are on earth?

“Turn from their wicked ways”

The purpose of grace is not just to get God to overlook our sin but to find empowerment to overcome it. Scripture teaches us to deny, not indulge, wicked ways. The grace of God that brings salvation teaches us to deny ungodliness and worldly lusts (Ti. 2:11-12). Grace does not grant a license to sin; rather it liberates us from sin’s bondage.

One reason for why there is so little conviction of sin in the average church is that Christians tend to compare themselves with other flawed humans. Our sins don’t seem so bad when put side by side with the “wicked ways” of the “really wicked” people!

But in the inner sanctum of God’s immediate presence, we begin to see our own hearts for what they really are. The searchlight of God’s Word, coupled with the laser of the Holy Spirit, reveals “wicked ways” which are un-discerned in low-light conditions. As the goodness of God leads us to repent, we are brought face-to-face with our own lack of holiness. When God’s finger is pointed right at me, I am not drawing comparisons with others. My only concern is my own “wicked ways.”

When we as God’s people humble ourselves, we receive abundant grace to pray, seek His face, and find victory over besetting sins. This is the pattern in preparing for revival.