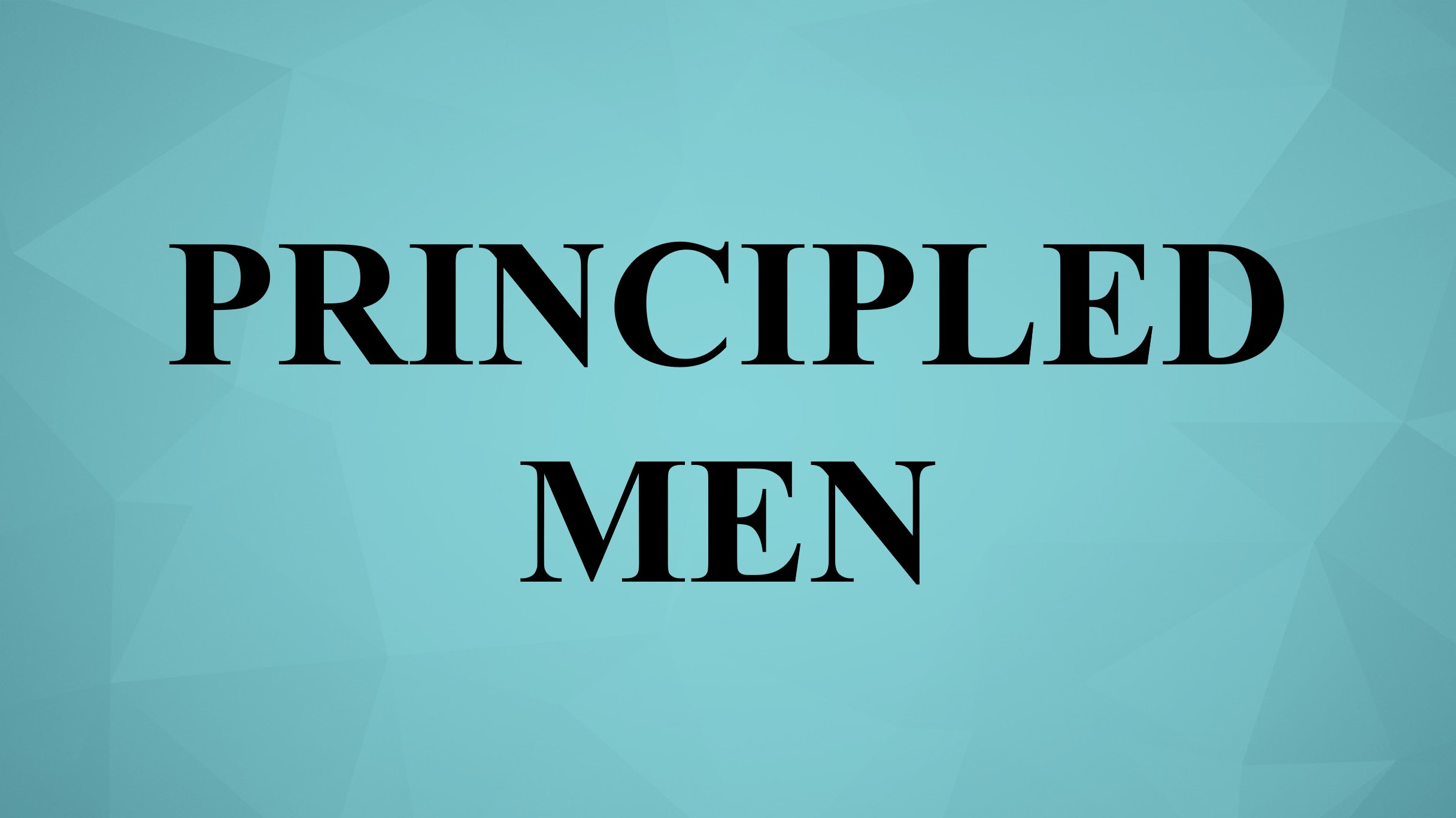 Principled men are at a premium in an age of expediency. When pragmatism is the ruling philosophy in a society, it is rare to find anyone who does not cave in. In the days of king Nebuchadnezzar, he signed a degree requiring all citizens to bow down at certain times in obeisance before his image. While most were compliant, there were three Hebrews who bucked his mandate: Shadrach, Meshach, and Abednego. These three were honorable, righteous, and just. They did not bow. They did not budge. And they did not burn! Role models for all ages, these men had backbone and boldness.

Men of Principle STAND UP. Failure to comply with this governmental dictate would bring certain death in a blazing furnace. But, “When all the people heard the sound of the cornet, flute, harp, sackbut, psaltery, and all kinds of music, all the people, the nations, and the languages, fell down and worshipped the golden image…” (Daniel 3:7). Notice that practically everyone did as they were told. Yet here we see a trio who refused to conform. Their religious convictions would not allow them to violate their consciences. In the face of death, they refused to be bullied into compromise.

What a contrast to many today who are nameless, faceless, and gutless. Scores grovel for recognition, position, and power in today’s establishment. But God’s giants not only have convictions, they have the courage of their convictions! There’s more than lip service to the cause, these souls are compelled to put their futures and reputations on the line for the sake of “right.” Men of principle always STAND UP for their beliefs.

Men of Principle SPEAK UP. The Chaldeans, the political establishment, informed the king about the Hebrew’s rebellion. Nebuchadnezzar was outraged and commanded them to be brought before him. There they stood with heads lifted high and their minds made up. After the king’s interrogation and death threats; Shadrach, Meshach, and Abednego, answered and gave an unflinching declaration to the king. They did not “plead the fifth”, back-peddle, negotiate, or attempt a political maneuver. They spoke plainly, “O Nebuchadnezzar, we are not careful to answer thee in this matter. If it be so, our God whom we serve is able to deliver us from the burning fiery furnace, and he will deliver us out of thine hand, O king. But if not, be it known unto thee, O king, that we will not serve thy gods, nor worship the golden image which thou hast set up” (Daniel 3:16-18).

Men of Principle STAND OUT. Nebuchadnezzar was furious. He commanded to heat the furnace seven times hotter than normal. The mightiest soldiers threw them into the blazing fire. The flame was so hot that it slew the soldiers as “Shadrach, Meshach, and Abednego, fell down bound into the midst of the burning fiery furnace” (v. 23). The king and his pawns were spell-bound as they saw not three, but four men loose and walking in the fire. The fire could not hurt them, and the only thing that burned were the ropes that bound them! On top of that, the fourth man was like the “Son of God.” Amazing. Jesus did not get them out of the fire, He got in there with them… and delivered them!

Then Nebuchadnezzar came near to the mouth of the burning fiery furnace, and told these “servants of the most high God” to come forth. And they came forth out of the midst of the fire. Everyone present noticed that the fire did not burn them, their hair was not singed, and their garments did not smell like smoke. The king was so moved by this spectacle that he changed his degree. His image was trashed, and only the Hebrew’s God could now be worshipped. These three STOOD OUT because they refused to compromise. No other God could deliver like that! “Then the king promoted Shadrach, Meshach, and Abednego, in the province of Babylon” (Dan 3:30).

Shadrach, Meshach, and Abednego dared to STAND UP, SPEAK UP, and consequently they STOOD OUT. This was in total distinction to the idolatry and corruption during Nebuchadnezzar’s reign. We need men and women who are blind to the winds of culture. Men, women, and youth who only pay attention to the wind of the Spirit. People of character with a zeal for God’s glory! Principled souls who dare to defy the norms in a defiled age. Individuals like the Hebrews who took a stand for truth.

***Considering a men’s event for your church in 2023? Check out the MAN UP WEEKEND