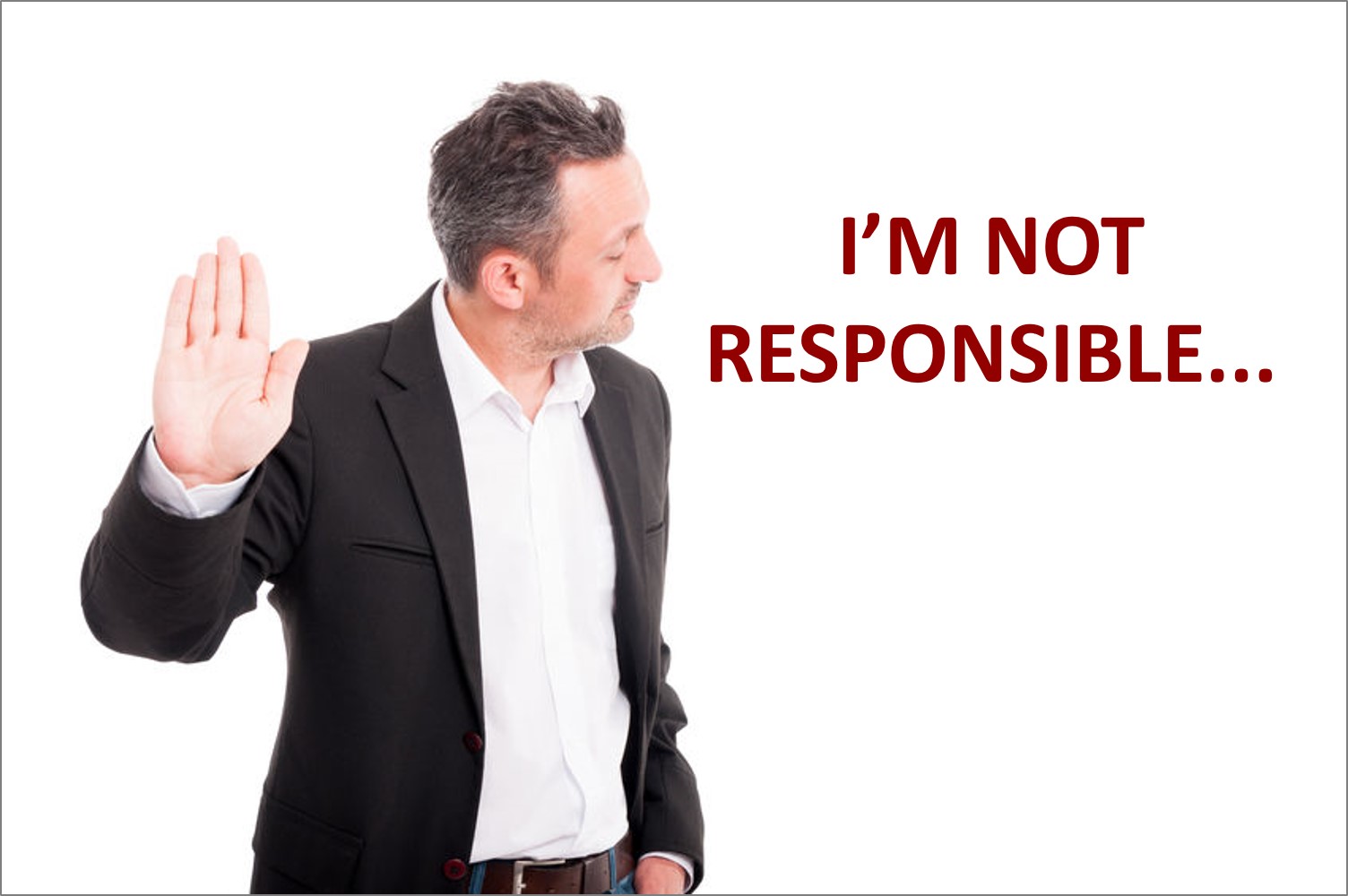 This generation is the least disciplined in our nation’s history.

Personal responsibility is downplayed on every level. Accountability for one’s actions is seldom taken seriously, or even mentioned. Dishonesty gets a pass, and is seldom challenged.

The deafening silence from the pulpit regarding man’s accountability to God has filtered its way down into our culture. Eternal punishment has been purged from most sermons. Even the so-called God-centered teaching is often riveted with concerns for SELF. Consider Philip Yancey’s statement, “There is nothing we can do to make God love us more, and there is nothing we can do to make God love us less.” There’s truth here, but the trouble with such one-sided statements is its neglect of balancing truth. When such quotes are not clarified, a false impression is given. God’s love is steadfast, but there are a thousand ways we can grieve our Father’s heart. Comfort-loving churches thrive on soothing, man-centered messages. But the New Testament is chock-full of severe warnings and corrective passages. Flawed preaching shy’s away from alarming truths in favor of comforting truth. The consequences of this negligence is at the heart of our ecclesiastical and societal chaos.

FORNICATORS. Moral irresponsibility has been the accepted policy in our country for decades. Sex education promotes experimentation and perversion beginning in the earliest years of schooling. Planned Parenthood even had a program which paid teenagers a dollar a day for not getting pregnant. But no reward was offered for abstinence. This was a push for the use of contraceptives among adolescents.

I guess some think Paul was a bit legalistic when he wrote, “But fornication, and all uncleanness, or covetousness, let it not be once named among you” (Eph. 5:3). Yet, immorality has been mainstreamed, even in many churches. Permissive parents sanction and enable their children’s sinful choices. Some even allow their children to “shack up” in their own homes. This practice was once described as “living in sin.” Moral evil is downplayed with statements like, “Kids will be kids,” or “times have changed.”

By the way, when did you last hear a sermon against pre-marital or extra-marital sex? Was Paul being unnecessarily harsh by saying, “Know ye not that the unrighteous shall not inherit the kingdom of God? Be not deceived: neither fornicators, nor idolaters, nor adulterers… shall inherit the kingdom of God. (1 Cor. 6:9-10). Paul was only the messenger—these words came from God Himself. Moral sin is serious!

While scores are up in arms about abortion, and rightly so; why is there no outcry against the cause of most unwanted pregnancies—fornication?

FREELOADERS. The federal government has aided and abetted social irresponsibility by financing unmarried mothers to bear children out of wedlock. Fathers are neither expected nor required to provide for the children they sire. Our nation is rife with DEADBEAT dads.

The welfare state sends paychecks to able-bodied people who refuse to work. I am not referring to the unfortunate who are disabled, or sick. The safety net covers those who have legitimate handicaps. But funding sheer laziness encourages dependency, delinquency, and irresponsibility. Any society that subsidizes such irresponsible behavior has lost its moral bearings. Welcome to the U.S.A.!

Obama-care was an assault on the producers in our society. Many self-employed people are now paying around $30,000 in annual health-care premiums. One goal of the “Affordable Health Care Act” was to bankrupt the middle-class by making private health insurance unaffordable. The intent was to foist socialized medicine on our society. Isn’t it interesting that federal workers, labor unions, and congressional representatives were exempted from the punitive Obamacare legislation? Now the Democrat candidates want to give free health care to illegal immigrants! And the Republicans who promised to repeal and replace Obamacare have done neither! Enough of this analysis, as I am feeling a bit “unspiritual”!

Social irresponsibility is the official policy that rewards those who will not work, and punishes those who seek to pull their own weight. Listen to Paul on the work ethic among believers, “This we commanded you, that if any would not work, neither should he eat” (2 Thes. 3:10). This is strong language.

FATALISTS. I find no preacher in Scripture lecturing sinners about their inability to repent, believe, or obey. To the contrary, Bible preachers insisted on immediate repentance, reconciliation, and restitution. The Old Testament prophets thundered out warnings about God’s righteous judgment and called on hearers to repent. Jonah, the reluctant missionary, delivered a message of judgment and impending doom to Nineveh (Jonah 3:4). The king pulled out all the stops to avert divine judgment. He called the entire city to a total fast and all citizens to turn away from personal evil (see Jonah 3:5-9). God took notice of their works, and spared them from destruction (3:10).

Sermons in the New Testament were emphatic appeals calling for immediate action. John the Baptist issued the command to REPENT (Matt. 3:1-2). Jesus called on people to REPENT (Matt. 4:17). Paul warned people day and night with tears. He challenged them with the necessity of repentance toward God and faith in the Lord Jesus Christ (see Acts 20:21). Neither John, Jesus, nor Paul ever insinuated that men were void of the capacity to respond to their messages. They all preached for a verdict—and many believed!

Spurgeon believed in “duty-faith.” He taught that it was man’s duty to repent and believe. Spurgeon proclaimed Jesus as Messiah every week and urged his hearers to be saved. We are all aware of his theological grid, but this did not keep him from persuading sinners to trust Christ for salvation. He eagerly offered Christ to any who would believe. He appealed to their minds with truth. Then he challenged them to respond with their will. Spurgeon invited those who desired to be saved to speak directly with him in his vestry (office) after his sermons. Scores were convicted in their consciences through his preaching, and converted through his counsel. He destroyed their arguments for unbelief, and persuaded them to trust Christ alone for salvation. Thousands called on the Lord and were saved through his ministry. How different is this from the heady teaching of many today?

Downplaying man’s responsibility to personally believe on the Lord Jesus Christ is foreign to the Bible. Scripture admonishes, “Seek the LORD while he may be found, call… upon him while he is near” (Isa. 55:6). Further, God calls on all men everywhere to repent (see Acts 17:30). This is the Bible mandate.

Moral and social irresponsibility have weakened the nation. The non-stop justification of immorality, laziness, and lawlessness has destroyed the moral fabric of our culture. Rejecting God’s moral will and the biblical work ethic has led us away from “one nation under God” to “one nation under government.” People who refuse to worship God will always deify the state. State worship and freedom cannot coexist indefinitely. Nations who abandon God will be ruled by tyrants.

Added to the rampant moral and societal irresponsibility, is this third leg of spiritual irresponsibility. Instead of proclaiming the gospel and the necessity of immediate conversion, there is a growing breed of theological fatalists contributing a nonchalant approach to men’s eternal destiny. Under this theoretical and philosophical scheme, urgency and godly fear has been removed. Evangelistic sermons have been mothballed. Peter Masters, the pastor of the Metropolitan Tabernacle in London, said that one reason for the spiritual darkness in the United Kingdom was the loss of the evangelistic sermon. He preaches an evangelistic sermon every Sunday evening at the Taberacle. A fitting practice as successor to Spurgeon! He destroys the arguments for unbelief and reasons why men cannot believe. His preaching makes Christ so attractive that unbelief appears unreasonable. Another reason Master’s listed for the spiritual darkness in England was the influence of John Murray. Protestant Europe is a spiritual wasteland because of theological determinism. Men were relieved of the duty to repent and believe, which contradicts the entire thrust of Scripture. Of course there is mystery in salvation, but our role is to preach the truth as it is to men as they are. When this is done, some will believe!

The amalgamation of moral, social, and spiritual irresponsibility is the gateway to anarchy and national demise. Socialism is idolizing the State which always leads to enslavement. Only responsible people will remain free.