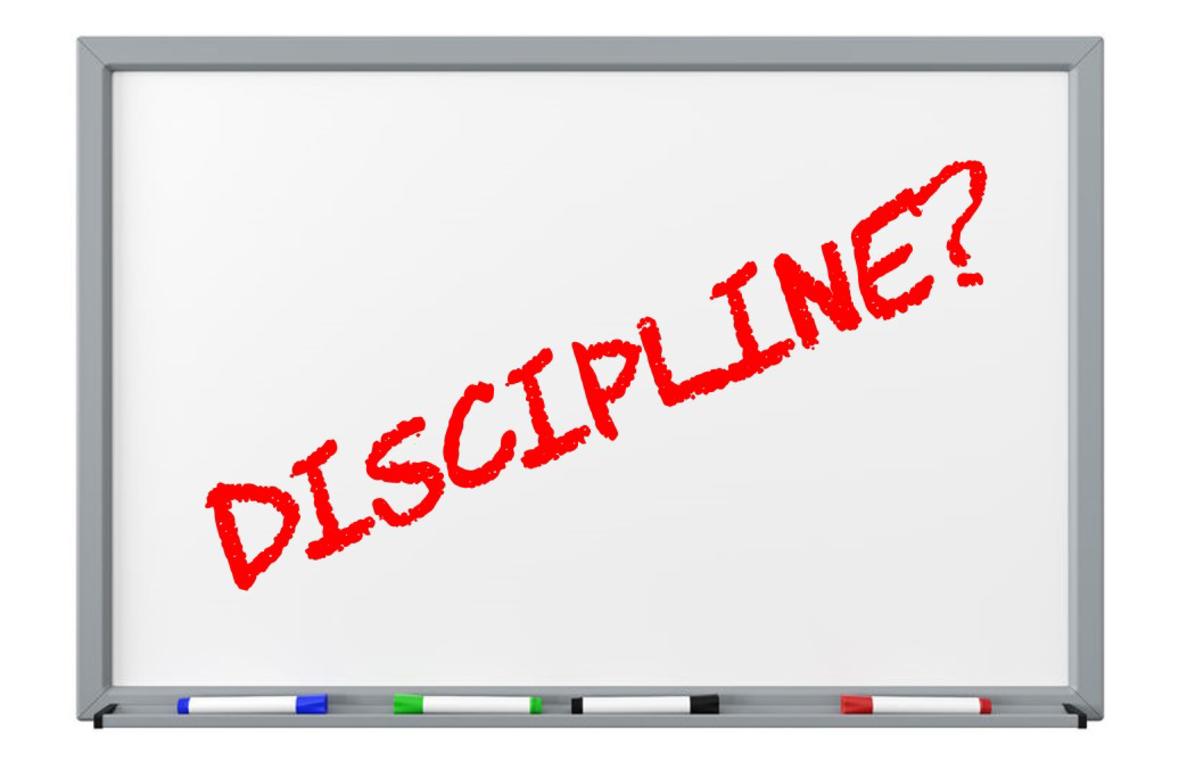 Discipline is out of vogue. The entitlement mentality has stripped the sense of responsibility from our nation. Anti-legalists (Illegalists) within the church, decry all prohibitions and boundaries as an assault on their liberty. The net result is an explosion of slacking, slouching, slipping, and sliding. Snobs may be repulsive, but spiritual slobbery is no better. The Bible speaks strongly to the subject of discipline in at least four areas.

Parental Discipline. R. G. Lee remarked, “Parental discipline has not disappeared, it has just changed hands. The children have taken it over!” Countless parents have let go of all authority. Many children have no respect for their parents, teachers, others, or themselves. The Bible is clear on the matter of discipline in the home.

“Withhold not correction from the child: for if thou beatest him with the rod, he shall not die” (Prov. 23:13).

“Fathers, provoke not your children to wrath: but bring them up in the nurture and admonition of the Lord” (Eph. 5:4).

Parental delinquency is the forerunner of juvenile delinquency. It’s time for parents to resume the ownership, responsibility, and control of their children.

Parochial Discipline. By this I mean the scriptural requirement of discipline within the local church. The church at Ephesus confronted false apostles which gained God’s commendation. I am not surprised that our governmental leaders have no will to address blatant corruption when most churches take the blind-eye approach to sin in their congregations. Government is a reflection of the  character of its citizens. Good luck on “Draining the Swamp” because it was the Swamp that elected them! Derelict church leaders reflect the character of church members. The reason leaders refuse to lead is because “keeping the peace” is valued more highly than obeying the discipline mandate. The “fear of man” trumps the “fear of God.” Rarely will you find a church that will obey the Bible in the matter of confronting sin in the congregation. Someone noted, “When church discipline goes out the window, Christ walks out the door.”

God had a controversy with the church at Thyatira (see Rev. 2:18-23). They tolerated a prophetess named Jezebel. She exerted an immoral influence teaching church members to commit fornication. But rather than deal with the problem, the pastors ignored her and the rampant sin within the membership at Thyatira. As it was then, so it is now. Rather than remove Jezebel, the sheepish pastor endorses sin through silence.

Paternal Discipline. Our Heavenly Father disciplines His children. “For whom the Lord loveth he chasteneth, and scourgeth every son whom he receiveth” (Heb. 12:6). God is any anything but a permissive parent—He is a strict disciplinarian. This passage goes on to state that those who receive no correction from God are not His children. Those who can “get away with sin” without a twinge of conscience have the devil for their father (John 8:44)—not the Heavenly Father.

Personal Discipline. Christ had twelve disciples. He commanded us to make disciples. The word “disciple” carries the idea of discipline. Scripture states, “Exercise thyself rather unto godliness” (1 Tim. 4:7). “Exercise” means to train oneself, or discipline oneself. Boundaries prevent bondage. Fences keep us from going places we have no business visiting.

Personal disciplines like prayer, fasting, and meditation are foundational to a holy living. Hyper-grace churches not only downplay any requirements in personal behavior, they affirm unabated freedom which is paramount to lawlessness. Principled standards from the Scripture are safeguards which reflect Christ-likeness. They testify of the difference that Christ makes in the life of His followers.

Disciples are different by intentional design—God’s and ours. Embracing discipline is sorely needed to bring balance and sanity to the churches in our nation. “I have decided to follow Jesus, no turning back.”