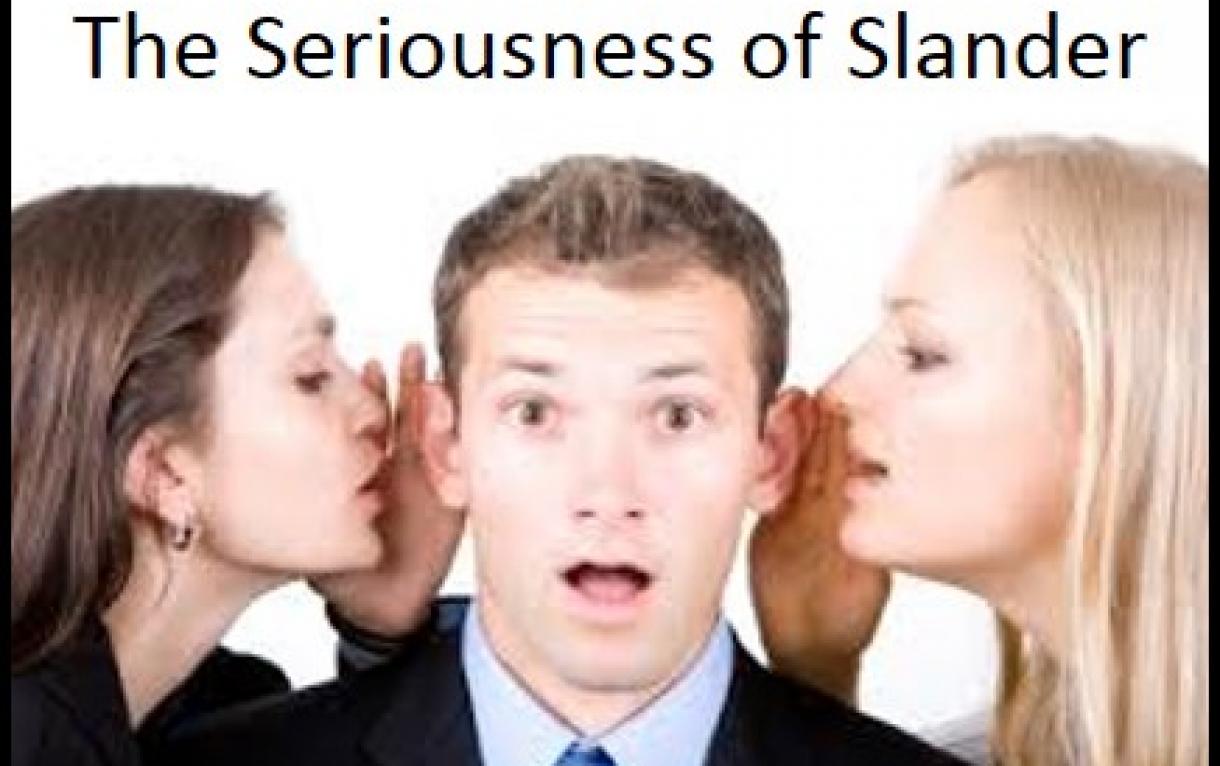 I once heard Bill McLeod say, “The favorite indoor sport of Christians is judging and criticizing.” Butevil speaking is strictly forbidden by Scripture. “Speak not evil one of another, brethren. He that speaketh evil of his brother, and judgeth his brother, speaketh evil of the law, and judgeth the law”(James 4:11). The crux of God’s law is loving the Lord and loving people. When you speak evil of your neighbor, you are breaking the law of God which is the law of love. Evil speaking in this context is paramount to slander.

To slander is to communicate a false statement that harms someone or some group. But, evil speaking also includes rehearsing things that are unverified, dredging up negative tidbits with the intent to discredit, malicious criticism, and the needless vilification of others. John Blanchard notes, “The man who seems unusually concerned with the demotion of others is usually concerned with the promotion of himself.” Pointing out the imperfections and marking secondary preferences in others is the mark of an insecure person—“Let us not therefore judge one another any more” (Rom 14:13). Small men talk about others, but great men talk about ideas.

I am well aware that Paul called out unruly people by name.  But, when an Apostle is compelled to issue such indictments against individuals, it is vastly different than fallible men making a career of never-ending character assassinations. There are times to speak out in order to inform and protect the flock.  But, there is never a time to slander good men and women. Is it possible that some of these so-called “watchmen on the wall” are in reality mouthpieces for Satan? Notice this admonition from James chapter three, “But if ye have bitter envying and strife in your hearts, glory not, and lie not against the truth. This wisdom descendeth not from above, but is earthly, sensual, devilish” (vv. 14-15). Could it be some of what is considered “discernment” is actually “demonic”?

One medical doctor noted that criticism is just as addictive as alcohol, or lust. The mindless, careless, and derogatory speech that slides by unchallenged festers in the hearts of those who speak it, and those who hear them. It defiles the heart and mind and in time can become a stronghold (imbedded satanic thought patterns in the mind). James says the tongue is “set on fire of hell.” The instrument that is intended to bless can devolve into a “little red devil.” Love is patient, kind, believes all things, and hopes all things (1 Cor. 13). But a devilish tongue bars the door to a heart of love while polluting the soul.

“But if ye bite and devour one another (partisan strife), take heed that ye be not consumed one of another” (Gal. 5:15). Sniping often leads others to join the verbal assault. Chrysostom said, “Slander is worse than cannibalism.” Biting and devouring one another is strictly forbidden by God. Listen to Zig Ziglar, “Don’t be distracted by criticism. Remember—the only taste of success some people have is when they take a bite out of you.”

Have you noticed how easy it is to repeat unsubstantiated rumor? When someone maligns a fellow believer with an evil report, it affects us deeply. “The words of a talebearer are as wounds, and they go down into the innermost parts of the belly” (Prov. 18:8). It is our nature to absorb and internalize the things we hear. Our very souls are wounded by the “whispers” of a talebearer. The ease with which some can smear another’s reputation, without a twinge of conscience, is staggering. Contentious people may stir you up, but they will never build you up.

The man who will slander others in front of you will slander you in front of others. Critics are never silent—it is in their make-up to infect others. Birds of a feather do flock together—especially vultures! You cannot wallow in verbal sewage without contaminating others with filth. Our spirit communicates even when our lips are silent.

Our words are the diets of other men’s minds and emotions. People feed on the words we speak.“The lips of the righteous feed many” (Prov. 10:21). Note the contrast here—“The mouth of the wicked poureth out evil things” (Prov. 15:28). The way we employ our lips, righteously or unrighteously, is our choice that affects us as well as those who hear us.

Romans chapter two contains this sobering statement, “Therefore thou art inexcusable, O man, whosoever thou art that judgest: for wherein thou judgest another, thou condemnest thyself; for thou that judgest doest the same things. But we are sure that the judgment of God is according to truth against them which commit such things” (vv. 1-2). God’s judgment is against anyone who judges another. The fault we find in others blinds us to our own flaws. Solomon wrote, “The lips of a fool will swallow up himself” (Eccl. 10:12). Foolish speech is like a boomerang that returns to consume the man speaks it!

Humble people endure the imperfections in others because they recognize they have imperfections as well.  John Owen writes, “The person who understands the evil in his own heart is the only person who is useful, fruitful, and solid in his beliefs and obedience. Others only delude themselves and thus upset families, churches, and all other relationships. In their self-pride and judgment of others, they show great inconsistency.”

A similar sentiment is expressed in this verse, “Who art thou that judgest another man’s servant? to his own master he standeth or falleth” (Rom. 14:4). Who are we to pass judgment on God’s servants? Self-righteousness justifies “self” while condemning others. In doing so, we take upon ourselves the role of God in determining right and wrong motives based on our own wisdom.  Servants, such as ourselves, will ultimately give an account for our own words and actions, so we must take great care in how we speak of our fellow servants.

“He that uttereth a slander, is a fool” (Prov. 10:18). Libel is a sin which has its own built-in judgment. Jesus taught that the standard we impose on others, will be imposed upon ourselves (Matt. 7:1-2). A man will reap what he sows.

Are you weary of malicious gossip? Even as our nation is in the grip of moral and economic suicide, there remains a militia of moral midgets consumed with fault-finding. They can catalog weaknesses in everyone, and every movement, except themselves and their group.

The belligerent, militant cancer called slander is ever on the lookout to spread its poison. So, the next time someone begins to slander another in your presence, have the courage to tell them you will NOT listen. We already have the devil and our own flesh encouraging us to be critical. We don’t need a third party coming along to assist us!

Katherine Caldwell summarizes the issue: “What then marks a kingdom citizen? He is one who avoids self-righteous, condemning judgment; yet is capable of righteous, humble, biblical discernment after confessing his own sin. Christian judgment is to be a balance between holiness and helpfulness. We ourselves must be holy before we can ever be truly helpful to anyone else.”

“LORD, make me mindful to judge myself before judging others. Deliver me from slander. Amen.”