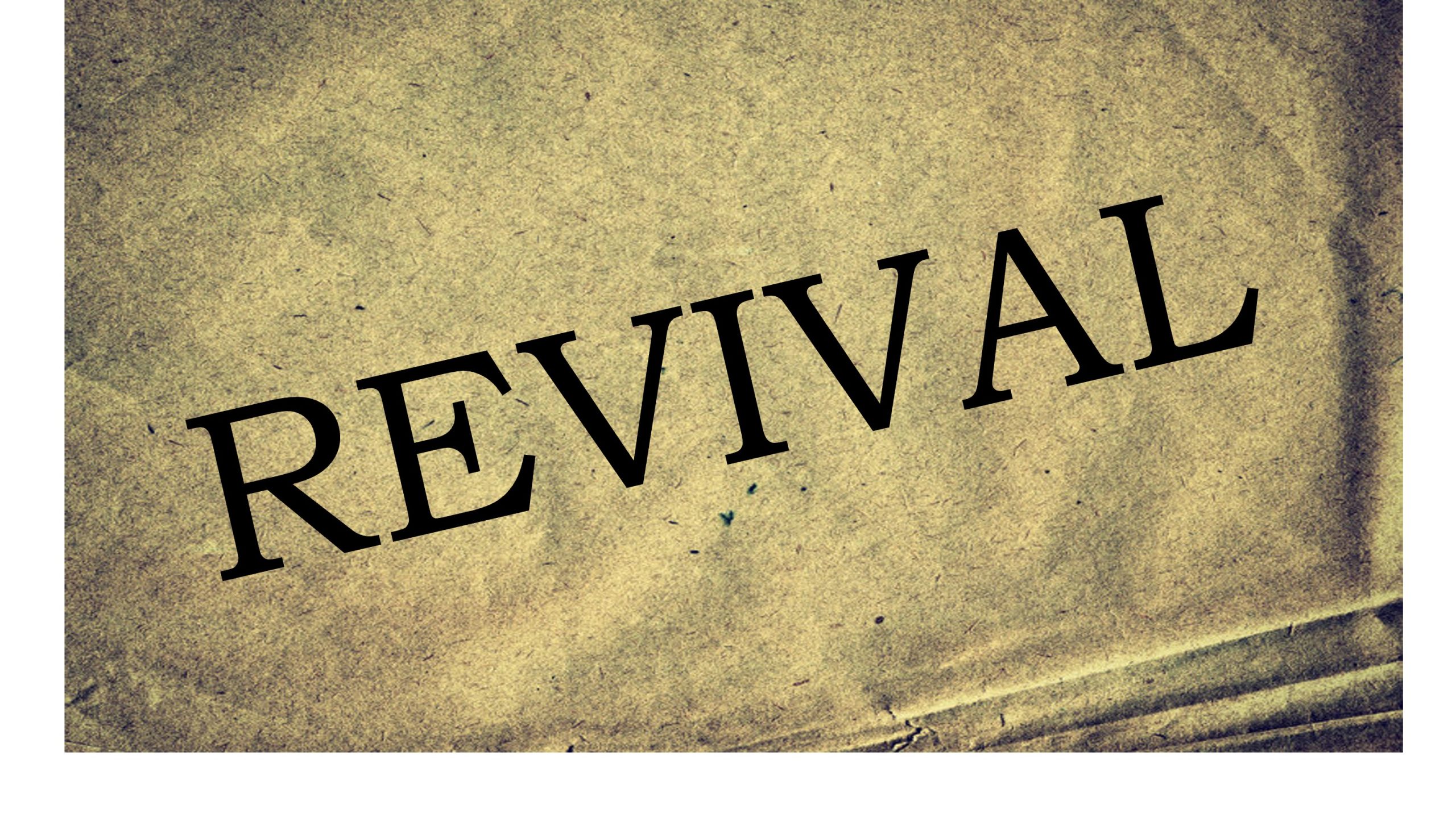 “The prayer for revival is ultimately a prayer based upon a concern for the manifestation of the glory of God.” —D. Martyn Lloyd-Jones

“[Revival] changes the moral climate of a community.” —A. W. Tozer

A little girl spoke to her father as they were pulling out of the driveway, “Daddy, where are we going?” The father responded, “We’re going to revival.” The tiny girl replied, “Daddy, have I ever seen one?” What a question! Have you ever witnessed the extraordinary working of the Holy Spirit in revival? One man put it this way, “We go through some meetings, but some meetings go through us.” The need of the hour is meetings that go “through us!”

The word revival is sparingly used in the Bible. Though rarely used, the concept of spiritual resurgence is woven throughout the entire fabric of Scripture. In fact, the history of Christianity is the unfolding drama of repeated renewals.

Periodically, God must send times of refreshing or else the entire Christian enterprise would fade into oblivion. Revivals have been taking place all across the world since Pentecost. The scope and scale have varied, but these outpourings have brought new life time after time. I believe it was Leonard Ravenhill who said that “Revival is when God gets so tired of being misrepresented that He personally takes the field to clear up the discrepancies.”

What constitutes a real revival? How large and impressive must it be before it can accurately be referred to as “revival?” Are there revivals taking place today? What are the levels, or parameters, of revival? To comprehend revival in our generation, it is imperative to understand its scope.

In 1904 the Spirit of God invaded Wales. The nation was touched in an astonishing way, and the entire fabric of society was impacted. God and eternity took center stage, and the things of the world grew strangely dim. The taverns closed down as the hearts of the fathers were turned to their children. Judges were presented with white gloves because there were no criminal cases to try. Police formed quartets to sing in the meetings as crime virtually ground to a halt while the nation was under the glory cloud.

God used the Wesley brothers and George Whitefield to impact England. Jonathan Edwards and many others saw the Great Awakening sweep through in America. Northern Ireland experienced a season of refreshing in 1859.

On September 21, 1857, a city missionary named Jeremiah Lanphier called a prayer meeting on Fulton Street in New York City. Within six months 10,000 businessmen were praying daily for revival. By 1859 this mighty spirit of prayer descended across the entire nation. This event came to be called the great American prayer revival of 1859. One man traveling from Omaha to New York remarked, “The whole nation is a prayer meeting!” Without mass meetings or human organization, historians estimate that two million people were born again during that time.

The mighty Korean Revival of 1907 laid the groundwork that prepared thousands of souls for eternity. News of the awakening in Wales and India came to the missionaries in Korea. William Blair and Bruce Hunt stated, “We had reached a place where we dared not go forward without God’s presence. Very earnestly we poured out our hearts before Him, searching our hearts and seeking to meet the conditions. God heard us and gave us an earnest that week of what was to come. Before the meetings closed the Spirit showed us plainly that the way of victory for us would be a way of confession, of broken hearts, and bitter tears.” Of this season of prayer, Jonathan Goforth said, “The early church did great honor to God the Holy Spirit by dropping everything and spending ten days in prayer to prepare for His coming. I have told how the missionaries spent one to several hours each day for months in preparing a way in their hearts for the Holy Spirit … They honored God and appreciated the gift of the Holy Spirit by meeting in the church for prayer at five o’clock—not five o’clock every evening, but every morning through the fall and winter of 1906-7. They honored God the Holy Spirit by six months of prayer and then He came as a flood.”

Here is a prayer for a broad, sweeping move of God. Habakkuk is beseeching the Lord for an across-the-board downpour. He is praying for God’s work at large. “Revive thy work” expresses a longing for a corporate outpouring with far reaching implications. Intense needs call for an extensive work.

John Knox prayed, “Give me Scotland or I die.” Two elderly sisters, one blind and the other physically handicapped, asked God to invade the Hebrides, and it happened! There are seasons when things degenerate in such a widespread manner that only a move of global proportions will suffice. Surely, this is an appropriate prayer for today. With signs of spiritual death and decay on every hand, we desperately need a fire-fall.

At times the Spirit of revival has gripped geographic regions. What begins in one church is extended to surrounding congregations. The sacred flame spreads from community to community. Historically, districts in the Scottish Highlands have seen spiritual resurgences. The circuit-riding Methodist witnessed similar movements. These area-wide renewals remind us of the promise, “I will pour… floods upon the dry ground” (Isa. 44:3).

Remember how God chose a reluctant missionary named Jonah to bring the message of judgment and repentance to Nineveh? He had personal revival in “Whale University” and hurried to warn the city of impending judgment. The king had ears to hear and called on the entire city to humble itself and repent. The raging wrath of God turned away from the inhabitants as they bent low before the Lord. Nineveh was spared and 120,000 people were saved!

The Ranchers Revival in Nebraska moved from community to community in the 1980’s. The Fisherman’s Revival started in 1921 and was centered in the northeast coastal area of Scotland. Jock Troup became the leading evangelist who later preached from 1932 to 1945 in the great “Tent Hall” in Glasgow. A regional revival is expansive in its scope.

E.M. Bounds was born on August 15, 1835. He practiced law until he felt a call to the ministry. He was ordained as a Methodist minister in 1859. He served as a Confederate Army Chaplain during the Civil War, during which he was captured and held prisoner for a short time. Bounds returned to Franklin, Tennessee after his incarceration. Upon his return, “he found the church in a wretched state.” Immediately he sought out a half dozen men who truly believed in the power of prayer. They met every Tuesday night and got on their knees to pray for revival, for themselves, the church and the town. Lyle Dorsett writes, “For over a year this faithful band called upon the Lord until God finally answered by fire. The revival came down without any previous announcement or plan, and without the pastor sending for an evangelist to help him.”

God does not send revival to denominations or select groups. He sends revival to individuals whose hearts are “thirsting.” It seems that the congregations that are blessed with local church revival are always led by a pastor who is longing for the presence of God. Those who are content to live without revival will not see God move in a powerful way. But those who are desperate for the presence and power of God find what they are looking for. Personally, I have never seen a local church renewal that did not have its origins in the heart of the under-Shepherd.

The Moravian Revival of the eighteenth century was one of the most productive since Pentecost. John Greenfield writes of what occurred around noon on Sunday, August 10, 1927. “While Pastor Rothe was holding the meeting at Herrnhut, he felt himself overwhelmed by a wonderful and irresistible power of the Lord and sank down in the dust before God, and with him sank down the whole assembled congregation, in an ecstasy of feeling. In this frame of mind they continued till midnight, engaged in praying and singing, weeping and supplication.” That which began with the man in the pulpit set in motion the blaze in the pew.

Regardless of the general spiritual climate, local churches can experience the fresh breath of heaven. When the majority of people in a given body is refreshed, a local church revival has taken place.

Wilt thou not revive us again: that thy people may rejoice in thee? (Psalms 85:6, emphasis added).

Note the words “revive us.” Here the Psalmist is beseeching God for his own heart and the hearts of those closely associated with him. He is not asking for a revival of God’s work at large.

The most intense revivals are those where the people get judgment-day honest with God, themselves, and others. When you have people willing to say out loud, “Lord, you are right and I am wrong,” you are in an atmosphere where God can work. Wherever you find a group of individuals humble enough to take the witness stand against their own hearts, you will find an Interpersonal Revival. It is no less powerful than a Local Church Revival—only less extensive.

It was New Year’s Day, 1739 in London at the Love Feast in Fetter Lane. John and Charles Wesley, George Whitefield, several other Oxford Methodists, and about sixty Moravians were present in the meeting. Wesley writes, “About three in the morning, as we were continuing instant in prayer, the power of God came mightily upon us, insomuch that many cried for exceeding joy, and many fell to the ground. As soon as we were recovered a little from that awe and amazement at the presence of His Majesty we broke out with one voice—“We praise Thee, O God; we acknowledge Thee to be the Lord!’” Here we see an interpersonal revival that had enormous repercussions.

Though I walk in the midst of trouble, thou wilt revive me (Psalms 138:7, emphasis added).

One preacher, as he stood before the congregation in his opening remarks said, “I hope you did not come here to hear me talk about revival; I hope you came to be revived.” Revival is not just something to talk about, it is something to experience.

Psalm 138:7 is a prayer of confident expectation: “Lord, I am walking in the midst of all kinds of perplexities and problems, but You will revive me.” The focus here is not on local church or interpersonal, but personal revival.

Arthur Wallis commented, “Revival is divine intervention in the normal course of spiritual things. It is God revealing Himself to man in awful holiness and irresistible power.” This is precisely what happened to Isaiah when he said, “Woe is me! for I am undone; because I am a man of unclean lips, … for mine eyes have seen the King, the LORD of hosts” (Isaiah 6:5). Job echoed this same sentiment when he said, “I have heard of thee by the hearing of the ear: but now mine eye seeth thee. Wherefore I abhor myself, and repent in dust and ashes” (Job 42:5-6). Close encounters with God bring an intense conviction of sin.

In this chapter we have looked briefly at the parameters or levels of revival: National, Regional, Local Church, Interpersonal, and Personal. Is your heart longing for a fresh encounter with the living God? All revival is personal in nature, and the scope depends on the number of individuals involved.

This chapter is from “Revival In Our Time – Outside the Box—Inside the Book!”. CLICK HERE for more information on the book.