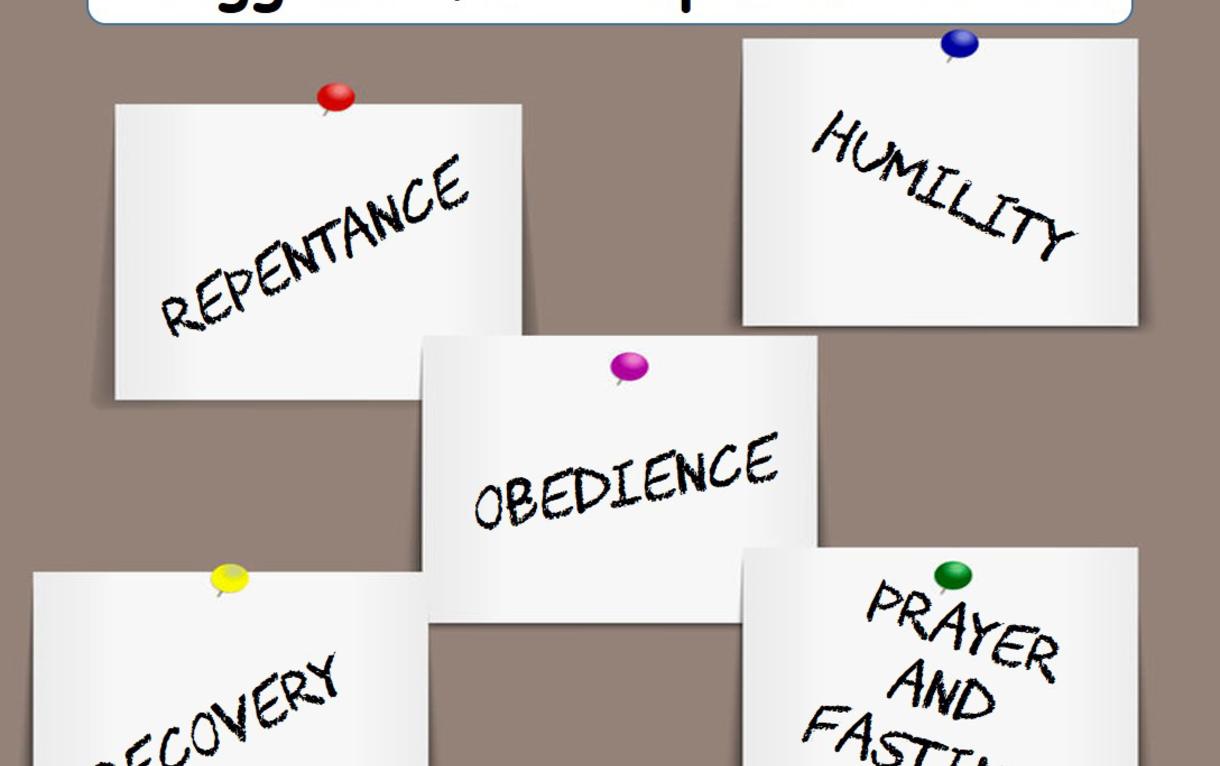 The first step toward any solution is the RECOGNITION of the problem. Israel’s religious leaders were unaware that the Glory-cloud had not hovered over the Mercy Seat for 400 hundred years. The priests were oblivious to God’s absence. The blind were leading the blind. God’s chosen people had grown accustomed to lifelessness—no divine interruptions or interventions. The Pharisees were so far removed from vital reality that they led the charge to crucify God’s Son. Think about it—it was the Orthodox crowd that most vehemently opposed the only begotten Jesus! Is it possible the same thing is happening now?

Churches that experience no Heavenly invasions, interruptions, and disturbances are void of life. Visiting many so-called “Bible-believing” churches now-a-days is no different from visiting a liberal church. No freshness, no conversions, no sense of God, no conviction, no power, and no LIFE.

Revitalization will not take place until there is a recognition of God’s absence. But discerning the problem is only the beginning. Wisdom is needed to know what trigger is required to release God’s power. Next, courage is needed to ACT. Listed below are some triggers for church-wide revival.

REPENTANCE. God called on the churches in Asia Minor to REPENT. This mandate was issued from top-to-bottom, and everything in-between. God addressed his concerns to the “angel” in each church—that is the messenger or pastor. It is interesting that these letters were not sent to the deacons or board members, but specifically to the pastors/shepherds.

The church at Ephesus was threatened with extinction and called upon to repent (Rev. 2:1-7). There is no such thing as “eternal security” for a local church. The Middle East testifies to the fact that God Himself can put any church out of business!

Pergamos was tolerating false teaching and immorality. They were called out by the Lord and given a mandate to repent (Rev. 2:12-18).

Thyatira was deep in Satanic darkness, deception, and depravity. Jezebel’s influence toward idolatry and immorality were strongly condemned. The call to repentance was emphatic (Rev. 2:18-29).

Sardis has a name to be alive, but in fact was DEAD. The Lord’s challenge was to remember and repent, or be ruined (Rev. 2:1-6).

Laodicea was tepid, neither hot nor cold. God described them as poor, wretched, miserable, blind, and naked; yet they thought they were in good shape! Their condition was so appalling to God that He was ready to vomit them out—SERIOUS INDEED. And the sole remedy was immediate and thorough repentance (Rev. 3:14-22).

Five out of seven churches in the first century were commanded to repent. Are there any churches in the 21st century that need no repentance? He that has ears to hear—let him hear what the Spirit is saying… to your church.

Instead of rearranging the deck chairs on the Titanic and hoping for improvement, it’s time for a fundamental change in thought and approach. Why not put the entire church program at the feet of Jesus? The following prayer might be a good place to start, “Lord, what subtractions are needed in our church? What additions? What changes? LORD, what would You have us to do?”

HUMILITY. God opposes the proud, but gives grace to the humble (James 4:6). Humility is a primary way to get God’s attention (Isaiah 66:2). God will “look”, pay attention, and listen to humble individuals. Correspondingly, it is amazing what God will do for congregations who humble themselves under His hand.

Sometimes we must take the witness stand against ourselves and agree with God. And what is true of individuals is also true of local churches. It sure is easier to point out deficiencies elsewhere than in our own group. Objectivity is desperately needed, and this unbiased perspective is acquired only in God’s manifest Presence.

Listening to God is just as much a part of prayer as speaking with God. Perhaps if we would stop offering our amateur prayer requests (needs and suggestions), and begin listening to the speaking voice of the Spirit, we would get God’s evaluation on the situation at hand. Pastor, are you hearing from God? Is He birthing ideas, vision, strategies, and immediate steps in your heart and mind? Instead of looking to the past, start looking toward a preferable future. Yesterday is over. What you do today will determine the quality of tomorrow. So tune your ear to discern the voice of Jesus.

Rare is the call to corporate humbling. But it is this sort of brokenness before God which opens wide the channel for the inflow of divine mercy and grace. Humility is always the doorway to divine favor. God opposes the proud, but He gives grace to the humble. Limitless possibilities await assemblies who humble themselves before Him.

OBEDIENCE. Revival is often triggered by some act of obedience. It’s past time for Shepherds to cast off the “fear of man” and obey the clear precepts and commands of Christ. Instant and complete obedience is noted in heaven. Obedience brings blessing, but disobedience brings a curse.

Sin in the camp must be confronted. When churches refuse to judge public sin, church members start condoning personal sins. A lack of scriptural accountability always leads to a falling away, and scores of churches are “already gone.”

When denominations and groups deny, or ignore, the Word of God: they are already gone.

When Christian Ministries move from a fixed moral code to a fluid moral code, those ministries are already gone.

When preachers refuse to call out sin (2 Tim. 4:2), those preachers are already gone.

When individuals and churches stop repenting, they are already gone.

God spoke to the seven churches about the specific needs in each location. He still speaks to pastors who will listen. So the first thing is to get in a position where you hear God’s voice. Repentance, humility, and obedience are the first steps to regain spiritual hearing.

How many congregations are praying for revival, but not obeying? Prayer is never a substitute for obedience. Instead of asking God to bless what you are doing, why not ask the Lord what actions He requires of you, and your congregation?

RECOVERY. Another historical trigger for corporate revival is the recovery of some neglected Truth. When God’s spokesmen are gripped and quickened with the revelation of some pointed truth, it can act as a gateway for grace to invade the entire church.

If everything rises and falls on leadership, then it stands to reason that the preacher must be arrested by a Truth before the people will be gripped by that Truth. The life of any ministry is conditioned by the life of the minister. Something happened in Jonathan Edwards before the fire fell during the Great Awakening. Something gripped John Wesley and George Whitfield before England and America were rocked to their core under their ministries. “Quickening” is the Spirit’s work. Cooperation with the Spirit is OUR responsibility.

Countless churches never experience the convicting sense of Holiness invading their services. It seems the aim of the contemporary pulpit is offering people a steady diet of “comfort.” Richard Owen Roberts said, “The only problem is that most churches are already so comfortable that you would think they were engaged in a sleeping contest.”

When a Truth arrests your attention, then give your full concentration to it. Work with the Holy Spirit in prayer and massage that neglected principle deep down into your spirit and soul. Recovery is a process that requires time and effort. Your future ministry is determined by the thoroughness of how you deal with God’s dealings in your own soul.

Churches go through seasons. Don’t move on to another season until your current season is complete. Absorb the truth that captivates you until it becomes incarnate IN you and your church.

A desperate father came to Jesus. His son was demon-possessed. The powerless disciples offered no deliverance. Jesus healed the boy. When the disciples asked Christ why they were unable to cast the Devil out, Jesus replied, “This kind goeth not out but by prayer and fasting” (Matt. 17:21). Some things will never improve apart from prayer and fasting. Miracles seldom manifest in a faithless and prayer-less environment. Desperate times call for desperate measures. Pushing away from the table allows us to pull aside and narrow our focus.

The Holy Spirit initiates all prayer-burdens. So be careful to indulge every desire to pray. Follow God’s leading in the matter of fasting. Lead your congregation in times of fasting and prayer, as the Lord leads you. Acts 6:4 details two chief duties of shepherds: “prayer and the ministry of the Word.” I believe that reference to prayer is dealing with the oversight of the corporate prayer ministry in the local church. Note that prayer precedes the preaching ministry in this text.

Any church could have a “perpetual fast” if they have only 30 people who are willing to give only one day a month to prayer and fasting. (See “A Perpetual Fast”)

Most churches in America have either plateaued, or are in a state of decline. Congregational decline is a process which always begins with neglect, disobedience, self-sufficiency and pride. Corporate repentance is also a process that begins in the heart of a Shepherd. As the pastor hears God’s voice and follows His instructions, recovery is underway. The process is always difficult, and will be different according to the needs in each congregation. Our concern must never be on the possible negative outcomes or difficulties. The Glory of God is at stake, and this trumps everything else.

So, will it be “Business as usual,” or the “unusual business of revival?” Like the marksman who sets his sight on a target: he must get still, zero in on his mark, and pull the trigger.

Pastor, which trigger is presently required in your church? If you are convinced of the need and the actions that must be taken, then go for broke and PULL THE TRIGGER NOW!